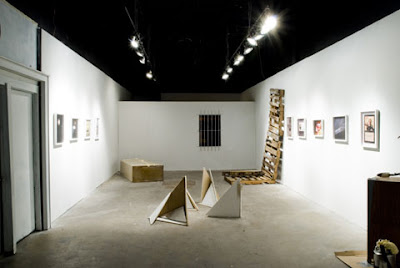 Butcher's works examine the repercussions of modern masculinity in the male psyche. The artifacts and images are tangible reflections of physical, emotional or metaphoric wounds. The iconography acts as a catalyst for the modern males & ""walkabout" to discover a more substantial sense of meaning and purpose. Combining a modern males' apotheosis for the Southern Gothic and the psychologically violent climate of America, the personal mythologies explore the psychological hinterland at the core of a fear-based culture where instability, exploitation and violence are ever present. Sleepaway Camp (1983)
After a horrible boating accident kills her family, Angela, a shy and sullen young girl, moves in with her eccentric aunt Martha, alongside her protective cousin Ricky. One summer, Martha sends the kids to Camp Arawak. Soon after their arrival, a series of bizarre and increasingly violent accidents begins to claim the lives of various campers. Who is the twisted individual behind these murders? The disclosure of the murderer's identity is the most shocking climax in the history of American cinema. -IMDB
Posted by Corkey Sinks 0 comments

Cut the Cord! at Okay Mountain

Cut The Cord! From Up Here Everything Makes Sense!

This group show is centered around the medium of video art. The videos will be shown in the screening format, one played after the other. There is no specific theme, rather the videos are put together as one would put together a mixed tape, allowing for a natural flow to form as one work leads into the next.

I have always wanted to see what production is like on a "real" movie or TV show. I can easily tell when something is high or low production, but I don't actually *know* what that means, literally.
So, I might go be an extra on Friday Night Lights. http://linkedin-us.simplyhired.com/a/li-jobs/view/jobkey-5370.6592796/jp-7/hits-72
( Ok, so I might also want to see the dude who plays "Tim" in person. sue me.)
Posted by anna k 0 comments

Law and Order: variations on a theme

My friend Matt recently introduced me to this Santa Cruz-based performer, Jazz-Elle. Her seemingly limitless energy and passion delight me every time I watch her vids. We all should be so lucky to feel this way about making art.

And a political performance...

Hey, it's great to see grassroots projects like NOBODY'S GIRL are alive and well in the ol' ATX. Last night some of us caught a screening of the 30-minute film, brainchild of Michael Nason (AUS) and Brendan Harman (NYC), at the Blue Theater. Shorts by Max Juren, Elliot Hoestetler and Duncan Malashock got the crowd pumped beforehand.

The central theme of the movie appears to be immigration, but I am still unpacking the whole thing - Harman threw the word Dada around a couple times when discussing the movie, so maybe I'll never finish. Regardless, it's really inspiring to see an ambitious, considered, collaborative work like this come to fruition. Shout out to Johnny Cisneros in his short, but dead-on portrayal of "Director."

Also, if somehow you can get a hold of Elliot's Rapture (getting sucked up to heaven, not the band) themed short, do so. It is perfect in all ways, right down to the highly visible... well, I don't want to give it away.